Customized version of Capcom’s Chun-Li character, for MUGEN 1.0; featuring details and moves from a variety of her video game appearances. The gameplay system is “PotS style”, the gameplay system pioneered by Phantom of the Server, which features gameplay mixed from several different games, including CvS2, KOF, SFA3 and SFIII.

Includes two modes: normal mode, based on her moveset from CvS2, SFIII, and SFIV; and Shadow Lady mode, which is primarily based on Chun-Li’s SFA moveset, but includes a few extras from the MVC incarnation of Shadow Lady.

As part of the Shadow Lady mode, this character features a number of palettes with flashing colors and other effects; one in particular is a palette styled after the X-Men character Mystique, which shifts between many, many different color palettes. This unique effect requires that a great many different palette files be kept in the sprite file (.sff) of the character, and on older computers, this can sometimes result in slowdown at certain points (such as when performing supers), even when using other palettes. If you encounter this issue, try downloading this version of Chun-Li’s sprite file, which removes the unique Mystique palettes that cause the slowdown (a normal, static Mystique palette is still available to be selected, however). 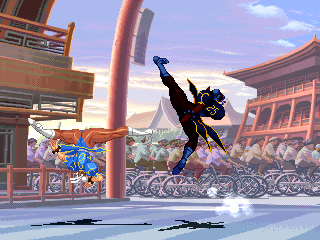